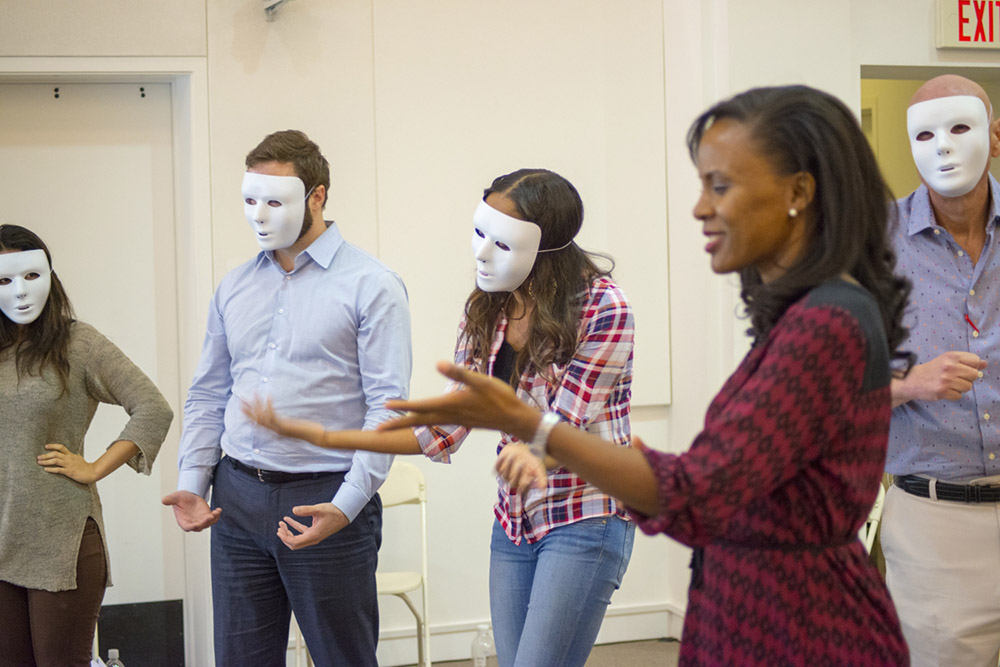 “Use It”: The Obstacle is the Opportunity

“The cure for the pain is the pain.”

Once we identify what emotional roadblocks are blocking our way—and we listen to what they are telling us and face them—we can then choose to use them to our advantage. In this recent workshop, the main method to help break through the blockade is for each client to create a three to five-minute monologue– a theatrical tool (picture a shovel, a pick axe, a bulldozer) which serves as a metaphorical digging device to get to the core and extricate the gem of truth—uncovering the real story hiding under the mask of fear and denial.

Who or what is causing the fear, the roadblock, the problems arising from real or imagined dead ends preventing growth?

When we’re no longer victims of our fear, the stage is set for us to live our lives with new perspectives and a strength we might not have ever realized was alive within us.

WORKSHOP: Narrative Therapy with “Lessons From The Stage”

BRANDON’S OBSTACLE:  The voice of the disease telling him to use again

BRANDON’S OPPORTUNITY: Not giving into the voice

Enter Brandon—a bad ass from the deep South with a giant chip on his shoulder. With two weeks of sobriety under his belt, Brandon is a reluctant participant. And that’s an understatement. Though he came up with the idea of facing his disease head-on, he is in no way going to perform in front of others.

“No way, man. I ain’t gonna go there. Eff that, dude. I don’t want anyone judging me,” he says, nodding to the group.

I sit back and watch this strapping young guy—tatted arms, teeth messed up from years of addiction—but still handsome in a rough-around-the-edges way. A kind of Heath Ledger-ness look about him.

“Fine,” I say. “It’s just you and me. Forget about the ‘performance.’ What if someone else were to play this part? How would they do it? What would it look like?”

Brandon’s jaw tightens. “If I were gonna have somebody else do it, I’d have them play my… my disease, or ego, or whatever the hell you wanna call it,” he says between gritted teeth.

I challenge him. “Show me.”

He is saying the words but I don’t believe him. He is acting out a forced performance. He knows it, too. He is more like a Harry Potter villain, not the voice, the enemy that landed Brandon in rehab again.

But I have something on him he may not necessarily be aware of. I watch him talking smack with the rest of the group. He is talking about women. And he does that a lot. I could imagine that outside of this place this guy is a bona fide lady’s man. So I ask him, “How much do you love the ladies?”

Brandon laughs and smacks his leg. “Man, it’s all I can think about. That and using again.” Then he gets a far-away look. “Aaah man, if I were to ever get out of here.” He catches my eyes. “Yeh, you got me. I’m a real romantic at heart.”

“Brandon,” I challenge him. “Let’s go towards what’s speaking to you the most right now. I mean really going towards the thing that’s digging at you the most. What is that right now? Tell me again how much you love the ladies…”

He leans back in his chair. Stares out the window. “Next to getting high it’s the ladies…”

“It makes sense. You’re in your twenties; you’re recovering. I get it. You’re a good-looking guy. Pretty smooth talker. I can completely imagine you talking to some woman at a bar and probably doing a great job at it.”

“So I want you to take that same passion and imagine yourself seducing a lady at the bar. Be that guy now. You’ve got everything going for you. And you know that you got this in the bag. So, go ahead and be that guy.”

Brandon seems to be getting this role-playing we’re doing. He understands that this is about seducing, taunting, facing-off with his addiction, which first becomes an enticing lady in a bar. And he wants her more than he’s ever wanted a woman. He begins to coddle and tease her. He totally goes for it—his humor, his charm comes front and center– and before I know it he’s oozing sex appeal to this invisible temptress in front of him. Now he’s prodding her, this pimped mack-daddy guy who’s melting her like butter on a hot plate, “….come on, darlin’, come with me. It’s gonna be great, just like it was before, only better. I think this really could be love…this could really be love, baby.”

Then I tell him to switch roles with this sexy addiction. I direct Brandon to now become the lady in the bar being seduced. I tell him that I want her to let him know that she is on to the bullshit she’s hearing. I tell him as the woman to stand up to that voice that is trying to take her away with him. And so “she” does. Brandon, now is more vulnerable as the lady in the bar and fighting back tears, faces her seducer looking like s/he’s carrying a 1,000-pound weight, “I want to go away with you because you’re so beautiful,” she says, “….but I can’t, darlin’. Maybe you’ll wait for me. Maybe you won’t. But I want something more than just what I’ve been doing with you, with others in this bar. I want to give it a shot, a real run for the money, because you know something? The next time I might die…and I’ll never, ever get anything from you. You’ll never make anything better. You can’t and I know you won’t…”

I let Brandon stay in the moment. Finally after a time, I say, “Okay, let’s go further. What happens when this guy—your disease—doesn’t get what it wants? I mean he’s being turned down by this lovely lady. So does the rejected fellow simply walk away, just shrugging his shoulders? Is he a gentleman about this?”

Brandon is looking down at the floor. He shakes his head. He tightens his fists. A vein in his neck is visibly pulsing. He knows this other guy “Nah, man,” he says. “He ain’t no gentleman. There ain’t nothing gentle about this cat…”

“Right,” I say. “So show me what it looks like when this cat—this rejected guy—doesn’t get what he wants.”

Now the scene is being played out in a way that suddenly becomes terrifying. Because this isn’t some Harry Potter bad guy. This is now an addict seething, fuming, broiling over into a fury doing everything he can to get into Brandon’s psyche. Now he’s one helluva scary dude. “All those times I was there for you and now THIS? Now you’re gonna turn your back on ME? I can’t believe you’re stabbing me in the back like this… I’VE BEEN YOUR BEST FRIEND.”

Shaking. Trembling. Barely able to stand he turns to me. After a time he catches his breath. A smile begins to appear. I tell him, “Brandon, if you can do what you just did you’ve not only freed yourself, but everyone in here who shares your story.”

Brandon has been role-playing with just me up to this point, but I ask him again if he’d like to do his monologue now based on this face-off with his disease. And yes, he finally agrees to it towards the very end of the workshop. The upshot is that everyone applauds when he finishes, offering him validating, supportive feedback.  Emotionally, he doesn’t go as far as he had when just he and I were working face-to- face, but he went as far as was comfortable for him in this moment. Best of all, Brandon showed up for himself and in so doing he faced his inner demon—his disease—possibly for the first time in his life.

For now, for this moment in time, he’s trusted the process of discovery. He’s allowed himself to see the value of pain and to use the obstacle that was using and destroying him.

TWO HELPFUL REMINDERS FOR IMPLEMENTING THE POWER OF THE OBSTACLE IN YOUR LIFE:

1.     Revealing your own vulnerability creates great credibility in effective communication, not just a “persuasive argument.”

2.     To fully communicate empathy for someone else’s pain, you have to dig deep and fully understand the nature of your own pain.