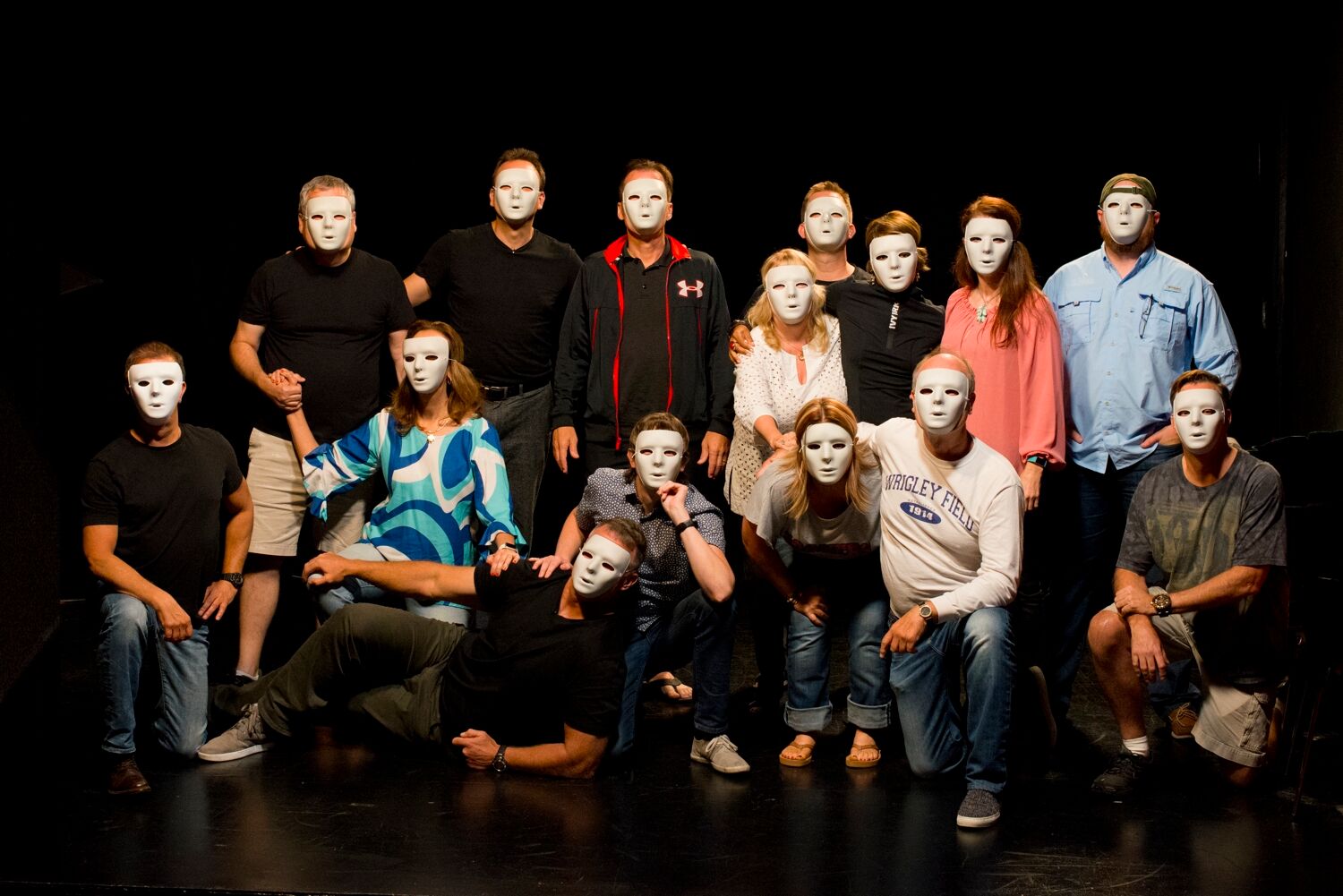 The Other Side of The Mask

One of the most powerful instances of breakthrough with a mask didn’t happen in a lawyers’ workshop. I have led workshops for inmates in prisons and jails. And in one of them, a man showed up whom I will never forget.

Late middle age, having been in and out the revolving door perpetually for a series of offenses such as drunk and disorderly, assorted minor crimes and probation violations, disturbing the peace of all around him and spending many of his prime years locked up as a result.

But he was an energetic fellow, ever eager to keep trying, so here he was in the workshop. I gave him a mask to try. It was hideous: the face of a grinning, leering, yee-haw redneck renegade.

The man looked at the mask. He said,

There’s a part of the inmate workshop called the redemption exercise. You are supposed to act the role of a villainous character finding and showing another side of himself. The man took the mask and created a stunning scene, which I’ll render in present tense so you can experience it as I did.

He’s a drunk at a bar. A bellowing drunk: “Hey man, I’m Throw-em-back Johnny! That’s what they call me, Throw-em-back Johnny.” Sure enough, he’s throwing back shots like a champ, and playing to the crowd: “C’mon, throw ‘em back with me. Wanna spark up a J with me? Anybody want to do a line with me?” …

Then: “Hey, you want to hear a good [N-word] joke? A good [Hispanic derogatory] joke?…” Now, people are telling him to back off, and next it’s: “I’m sorry, c’mon, let’s do a shot. Let’s do a line …” He is the epitome of the offensive guy in a bar that everybody notices and nobody wants to be around. He plays it like a roaring expert of the art.

Then, in the mirror, he addresses someone who might be an imaginary other person or himself, or both. “Hey, just hold on a second. I’m sorry, I’m sorry. I really am sorry. I don’t know why I do what I do. I hate what I am. This ain’t me … Can I show you a picture of my grandson?”

The man acts out taking the picture from an imaginary wallet in his back pocket, using words to cue us what the boy’s photo looks like: “He’s eight years old. That’s him, he’s playing T-ball. Ain’t he something?”

Brief pause again. “But this ain’t me. And—I don’t want to be like this guy any more. And I’m sorry. You want to have a drink with me? No jokes. Just—friendly company. Please stay.”

That’s how he ended the scene. It all came from wearing the mask. Then he said to me: “That’s me, man. All my life I’ve been pushing people away. I been hiding behind jokes, and getting people riled up, and, and—that’s gotta stop.”

He said he wanted to see and show more of the side that you or I might call his authentic side. The side that doesn’t need to put on a mask and an act to try to win friends and influence people. “Just friendly company. Please stay.”

We don’t know what the man’s future will hold. We have to wish him the best and move on to the rest.

Every great story is a story of hope… even if the hope never arrives.

Nearly everything you need to learn about Breakthrough Communication is present in the stories of the mask. Of course it will take more to recognize, develop, and see how you can use these skills as a lawyer/director of court cases. And the work that adds a great deal of deepening is the work with the monologue. You will see that in detailed action in scenes to come.

To learn more about how to apply the benefits and primary takeaways of the mask work to telling the right story with your clients in your current and upcoming cases, please feel free to check out the recently created eight fundamentals of breakthrough communication that was created at a recent seminar with a great trial lawyer, storyteller and friend, Mel Orchard.

Also, please stay tuned for upcoming trial skills seminars where we’ll deep dive into what it takes to deliver the KO opening statement and closing argument, working on the greatest untapped instrument in the courtroom, you and your ability to help tell the greater and your clients story in a much more powerful way than you might have thought was possible.

I look forward to connecting with you.

“I’m thinking about the mask work Jesse shared at Trial Lawyer’s College. I remember how any particular mask instantly affected our movement, our speech, our identity. And I’m wondering how much more do the masks handed to us or those we choose for ourselves in life affect everything about us? Let each of us identify the masks forced on us or those we choose – the strong one, the disappointing one, the one unwanted one, the powerless one, the clown – and let us shed each one and stand in the truth of who we really are without our masks.”

“Anyone who wants to better understand how to tell their clients’ stories should work with Jesse. And, that means all attorneys who represent people. At the heart of Jesse’s work is teaching attorneys how to feel – not just logically comprehend – what happened to their clients and how it affected their lives. Being empowered with this knowledge allows us to persuade just about anyone – including adjusters, mediators, judges, and juries – with both logic and emotion, which can greatly improve our results.”