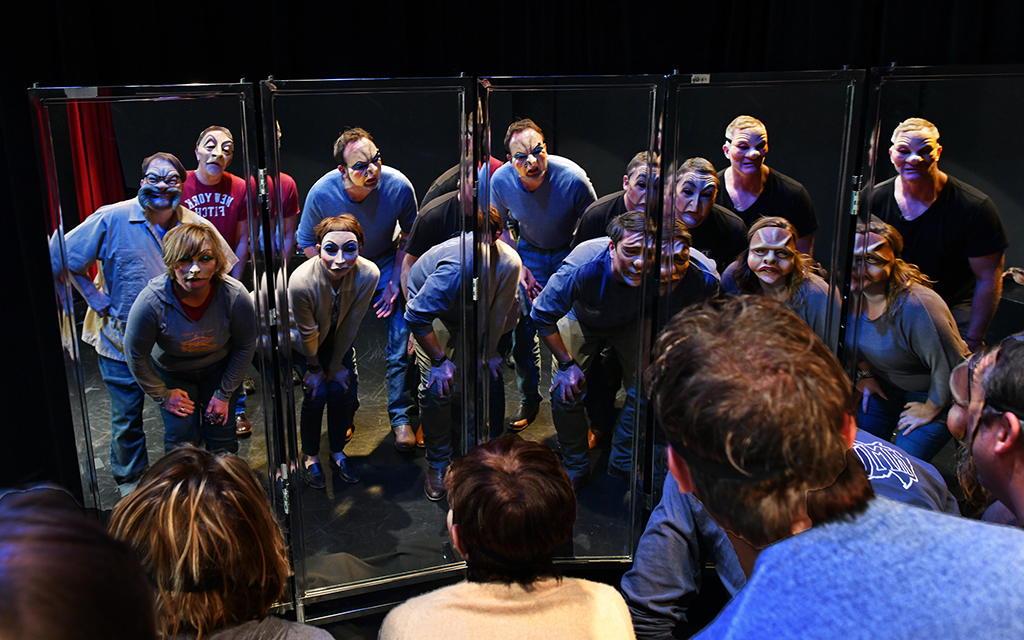 Last night I had a dream that I was working in a recovery program with inmates. I dreamt that I was with a group of about 10 dudes, and
Eminem was in that group. He was actually one of the inmates and he was in recovery. It was very realistic.

In the dream I said to one of the guards, “Am I right in this? Is that Eminem you know, Marshall Mathers?” He’s like, “Yeah, yeah, yeah, dude, but we don’t speak of that here.”

He says, “We don’t acknowledge him by that, man. He goes by like Kookee or something. I don’t even know what the hell he calls himself, man, but yeah, he’s kind of known to go off on other people when they bring that other name up. He’s like really worked hard at altering his persona, so it’s just like … don’t call him ‘Eminem’, you know?” I flashed back to when I heard about the actor that I worked with on “Saved by The Bell” when I was sixteen years old. The actor who played the role of Screech. My character was Nasty Neil the Hall Monitor. (Incidentally, earlier in the year, while consulting on a trial in Texas, my friend and excellent trial lawyer, Carson Runge, hilariously discovered a strange “Saved by The Bell” cult group which is worth sharing in a later post). Well, Screech and I were friendly, but the point is I was teaching masks in a recovery group not too long ago in a group (in real life, not a dream), and this guy during lunch break says to me, “Yeah, you know, everybody was laughing about you when they learned you were on “Saved By The Bell”, but you know actually I served a jail cell with that cat. Yeah, he was in for his murder rap and all that stuff, and all the drugs he’d taken. But he was a fighter, man. He said that if anybody even called him “Screech” he’d kill them, literally. Like,… ‘don’t even call me that’, he’d say. He was a pretty violent dude because of that name.”

So, perhaps it was that incident that triggered the Eminem dream. It seems to make sense to me now. So anyway, back to the dream. I’m in
this group, and it’s a really moving transformational experience. And we go through the whole thing, the whole enchilada, where they create, develop, and direct their life stories in the form of an original monologue. And I think this takes incident in the dream place maybe at
the end of the workshop experience. The whole time, I’m imagining him (the man who shall remain nameless) just in the back of the room, just sitting there. Watching the others working with the masks. Not participating, just sitting there just nodding his head slowly. Like, all right, whatever…

And after a while, throughout the workshop I kind of forget that you know, it’s Eminem. I’m thinking, screw it, I’m doing my thing. He’s doing his thing. Focus on what you’re doing with everyone else. Loving the work. Loving the process. Then we get back to the wrap up, and we’re all standing in a circle. I’m like, “Group it up, guys, group it up… listen…”

And there he is, he’s standing right next to me in the circle, and he’s kind of looking at the floor, and I say, you know, “I’m about to break protocol here. Something I said that I wasn’t gonna do, but you know what? F-it, man, ’cause you know, this person I want to talk about is a person who told me go a little deeper, don’t give up hope. Keep fighting another day. Don’t give in to what society has to say. You know, the person that told me to lose yourself in the moment, you own it, you must never let it go. The opportunity comes once in a lifetime, and would you just capture it, or just… let it slip away? You know what, man, if you never want to see me again, if you want to bust me up right here, cut me up in front of all these people, you gotta do what you gotta do… But I’m telling you that I’m doing what I’m doing because of that message, you know? And your message, man, saved my life. It literally saved my life in times where I wanted to give up all hope. And I don’t care what you call yourself, but I know who you are is more than your name, whatever name you want to call yourself. It doesn’t even matter, ’cause I know you’re more than your name. That’s what I believe. I want to thank you.”

You could cut your teeth with the silence that follows. Everyone is trying not to look at him, to see what’s going to happen next. Eminem cocks his head a little– that shaved hair’s that still dirty blonde– and he nods, but doesn’t quite look at me. Slowly, his right hand lifts up and he pats it several times over his heart like I got you, dog, I feel you.

I want to say Happy New Year right now to all the people out there who are on the verge, who are struggling to maintain the stamina it takes to stay committed to the belief that we are greater than we can ever possibly think of ourselves, and are willing to take one more bold step
further out into the stage to discover just how powerful we really are. At my core, I believe it is our greatness, it is our light, not our darkness that we fear the most. People who are willing, courageous enough to step into that light in 2019, need to ask themselves can we work through our pain and our fear to allow us to be able use it to our greatest advantage? Can we see it as an ally? Can we see it as a stepping stone to our greater potential, our greater voice? Can we see it as a greater way to bringing us to greater intimacy with the people we need to connect with the most?

And if the answer is yes, then I invite you to come along this journey with me. When you’re in sync with your true self that’s hidden behind the mask, you’re on the right side of the human spirit; the side where your raw courage lives. When you give yourself space and a place to be authentically you no matter how raw or frightening that may feel like at first, that’s the best place to be in this world.

Here’s to honoring the struggle together.

Welcome to the stage.