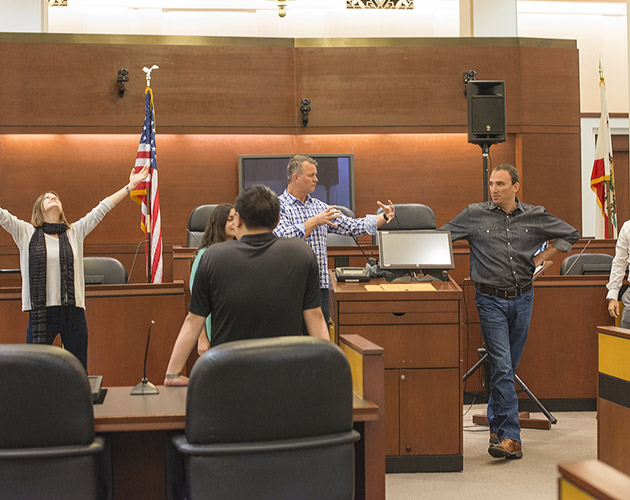 Entertainment is Not a Scary Word

ENTERTAINMENT IS NOT A SCARY WORD

Be Turned on By the Truth

“We were somewhere on the edge of Barstow…”

I’m consulting on a 3 week trial and I can feel the spirit of Hunter S. Thompson’s book “Fear and Loathing in Las Vegas” everywhere here in Sin City. But, thank God, now that I’m in my forties, I can do The Hunter Thing without trying to live up to scenes from the movie “The Hangover,” while still enjoying a healthy sense of adventure.

This is ultimately the greatest gift of Hunter’s book—his approach to his subject. He makes you see the world around you as if you were on another planet. And it’s not just because it took place in Vegas, or because he was on drugs, I don’t think. Instead, I think it was his relentless search for the truth that made the book so consumingly interesting for me. Hunter was determined to take the truth (or his discovery of the truth) as far as he possibly could. And we were along for the ride…

Because there’s nothing more entertaining than the truth.

When you begin to look at “entertainment” in communication as different than a “dog n’ pony show,” you are delivering something that is much more genuine to your audience. Genuine and riveting at the same time. And that’s not only the real story you need to tell… that’s you.

Today was Opening Statements. Leading up to today I experienced the same thing I see with 85 to 90% of lawyers and law firms.

Massive emotional disconnection to the client’s story and the theme of the case.

First off, it’s impossible to make a decision, whether you’re a trial attorney defending a person’s life, or trying to get a verdict or settlement of $20 thousand or $80 million for that matter, without making some kind of emotional connection. There’s no way you can make decisions of that magnitude, knowing that you’re going to affect someone’s life in such a profound way, if you’re not viscerally feeling the injury, or the loss of a loved one yourself, to the core of your being and that your client needs to be made whole in some way, even if only monetarily.

Or you know what? It’s also possible that the lawsuit is totally frivolous, complete bullshit, something you don’t believe in.  None of these are just cool, calculated decisions, they’re all backed up with powerful emotions.

When we refer to “the truth, the whole truth, nothing but the truth,” that truth should refer to the fact that you’re so emotionally centered that you don’t need to rely on thinking about how you’re supposed to feel about the case because it’s already so anchored into the story that you believe it in your entire being.

Once you believe it that viscerally and are that connected emotionally, the audience is listening. And the real fun begins.

At that point, you can play with case structure, wordsmithing… and allow yourself to be—gulp– entertaining in a way that is 100% authentic and true to your own personal style. You can do that because you’re telling the truth. And there is nothing more consumingly interesting than the truth.

The beautiful thing is that once you’ve figured out the real story of your case, and more importantly, found that story in you, you never have to wonder if what you’re delivering to the audience is entertaining or not. The entertainment factor usually takes care of itself without you having to force the desired effect on your audience– the jurors.

My client confessed to me, “I have difficulty expressing my emotion. My wife has told me that, and I definitely see it in myself.” It wasn’t something I had to tell him, he just knew that was his challenge. The morning of his Opening Statement, I had him do an exercise with me.

So I had him talk to me as if I was his daughter. I told him to imagine that she’s nine years old now and to take me into a real moment, and tell her right now as if she’s nine years old, what’s your favorite memory of her so far in this lifetime as your little girl? He talked about the first time that she watched “Frozen” and the first time she called her daddy “daddy.” In that moment, he brought himself into the scene, as if he were watching “Frozen” with his daughter on his lap.

“Good. Now I want you to imagine that it’s all taken away. This is what you touch upon here in your Opening. Now, all the stuff you got to prove, you layer it over that feeling of loss. THAT, is the real story. The hidden story. The greater story.”

One of the things that I was able to do really well with when I taught theater  was to be able to see the potential, the enormous potential inside a kid, even if it was just a glimmer. I’m still fascinated by that glimmer because I know if there’s such resistance to emotion, that means that there’s always so much more depth to draw from if you just know how to use it.

I could tell the exercise hit him right in the gut. “I got it,” he said. I saw a glimmer from him. Enough of a glimmer to make me think that now that this guy has gotten a taste for what the beneath the surface story of his case is– a man who admittedly says that he has a difficult time with emotion, he will be able to connect emotionally in ways that will move juries to make hard decisions. The kinds of decisions that affect people’s lives.

That tells me something powerful is at work.  I’d like to take credit for that power, but in the words of Tony Robins (who probably quoted somebody else),

“You’ve got the match. I just told you to strike it.”

In the spirit of Hunter S., be deeply, richly curious about your subject matter, the hidden emotion and the hidden story… allow yourself to be turned on by the truth because it’s more than worth telling.

Chances are, you’ll take us along the ride with you.